The Face of the Earth 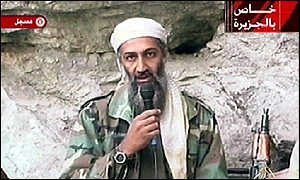 When I watched Osama Bin Laden transmitting his infamous statement from Afghanistan via al-Jazeera television on 7th October 2001, a little less than a month after the September 11th attack on the World Trade Centre, I said to my wife: "That's not very smart of him. Some geologist, somewhere, will know exactly where he is." Osama was standing in front of a crumbling cliff face of greyish, non-descript rocks, but nonetheless, I was convinced that someone would be able to position him almost, if not absolutely, precisely.

Just over a week later, on the 19th October, my parents came to visit. They arrived on a Friday evening. We collected them from the airport, then sat down with a cup of coffee to watch the news. One of the top items was the news that a geologist had identified the whereabouts of Osama Bin Laden. "I said someone would!" I yelled, excited that my prediction had been vindicated.

Most people who have never studied rocks, simply look at them and see greyish lumps. These are the same people who think that oil comes out of caverns underneath the ground. A minority, mainly people who have not grown up in cities, are likely to be able to name a few of the rocks they see. They'll know that limestone forms craggy white mountains, that granite is a very hard, black and white speckled rock and that basalt forms those famous columnar structures at the Giant's Causeway in Ireland or Fingal's Cave on the Scottish Island of Staffa, inspiration behind Mendelssohn's "Hebrides Overture"

But, in reality, there are many kinds of rock, and as Fingal's cave shows, that rock can have very specific characteristics. Basalt does not always form columnar structures. This is just one possible structure which may form under particular conditions. Just as you cannot step into the same river twice, neither can rocks end up looking the same way twice.

Looking at those rocks myself, I can see several distinctive characteristics. Firstly, they are clearly sedimentary rocks. That is to say, they were at some point deposited as grains of sand or flocs of mud. They have a very pale grey colour which suggests a rather limey rock, probably laid down in a sea. I have read that Afghanistan is a patchwork of geological formations, so those two observations alone would probably narrow the seach considerably, possibly even ruling out 80% of Afghanistan.

And yet, I can go further. The rocks are friable, they are breaking up and collapsing into a soft powdery mess even while they are clinging to the cliff face. This suggests they are very young rocks. They have not been deeply buried and are hence poorly cemented. There appear to be two different lithologies present: the lower part of the picture looks more clayey, the upper part more sandy. That means whichever formation this is must be heterogeneous. Any region of rocks which are entirely sandy or entirely clayey can be dismissed.

By this point, we may have ruled out 95% of Afghanistan's rocks and be left with a certain mountain range picked off a geological map. At this point, only a geologist who had done fieldwork in the region would know where to look. This man was Jack Shroder, a university professor who had carried out field work in Afghanistan during a period of almost thirty years. His work and that of the Afghanistan Studies Centre to which he belonged had received millions of dollars of U.S. government funding since the early 1970s. What information did the government receive from him? Maps sourced from the Russians during their invasion. Monitoring of Russian nuclear test explosions, that kind of thing. But his most important contribution seems to have been in his memory of the rocks he had seen in Afghanistan.

Those dusty looking rocks behind Bin Laden, this particular cliff face, half way to becoming rubble, are as characteristic to that place that he is standing, as the shape of his nose is to Osama Bin Laden's face. It seems that Bin Laden also realised his mistake. When he next broadcast on al-Jazeera on 4 November 2001, he had decided to opt for a sackcloth backdrop, detracting somewhat from his 'outlaw in the hills' image, but hiding the identity of the rocks behind him from the world.
Posted by Jonathan Wonham at 7:43 AM

you know way too much about rock. WHY?

What I really wanted to deal with in this blog was uncertainty, grey areas.

As for WHY I know a lot about rock, I'm a geologist, it's the nature of the job.