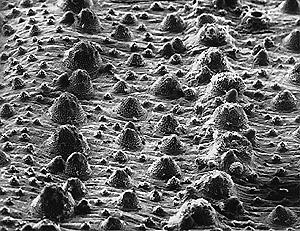 Do you think about your body much? I mean, what goes on inside your body?

I can't say I do. I just accept it. My body goes on doing what it does and I go on doing what I do and we don't generally have much to do with each other.

The other day I met an engineer for the Renault Formula 1 team, a woman. She was giving a talk on her work, which involved taking oil samples from the engines of Formula 1 cars and analysing them to see how much metal was in them. From what I understood, increasing amounts of metal in the oil indicate wear in the engine and need to be recognised so that when an engine blow out occurs, the engine can be rapidly replaced.

She described the taking of a sample in the same terms that a doctor would use, taking a blood sample with a needle to check the health of a patient: white blood cell level, the chloresterol count. The taking of a sample like this is intrusive. We have to cut through the outer membrane of skin to find the information we need.

But there are other methods to find out what is happening inside. We can listen with a stethoscope. Then we find that the outer calm of our bodies is somewhat misleading. Inside, there is a frenzy of activity. All that food and waste being shifted around. Blood pumping to and fro. Gallons and gallons of watery lymph filtering through us as if we were some sort of artesian reservoir. When the doctor takes out a stethoscope and puts it to your chest, he can hear it all.

And when we put our metaphorical ear to the earth, listening to seismic tremors, we can hear the same kind of thing going on. Distant rumbles and shudders. It is by listening to the earth that we know what is going on inside it. The earth which has a crust that is thin like the skin on an apple and which, at the centre, is a liquid ball with almost half the radius of the earth (about 3500 kilometres), flowing with a viscosity that is about the same as sugared brandy in a chocolate liquor. And at the centre of that liquid outer core? A ball of solid iron about the size of the moon.

Geologists know the earth is liquid around the centre because there is a shadow zone where an earthquake on the opposite side of the earth cannot be registered. All of the energy from the earthquake is deflected outside the shadow zone by the earth's liquid core.

The core is liquid because the temperature is so high. The temperature increases as we go deeper into the earth. Already, at the bottom of the deepest petroleum wells, around 6 km, the temperature is around 200 degrees centigrade. But at the centre of the earth, some 6370 km down, the core may be as hot as 5500 degrees Celsius according to calculations a few years ago.

If the earth had no skin on it, no crust, we would not be able to live on earth. Equally, animals rely on their skins to protect them from the outside elements. These skins, so different in nature, are equally alive and active: shedding, wrinkling, sloughing, being regrown.
Posted by Jonathan Wonham at 10:50 PM