Distrusting the Rightly So of Language 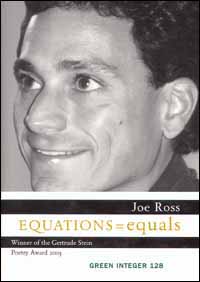 Distrusting the Rightly So of Language: A Review of EQUATIONS=equals by Joe Ross

How to approach this book? I could begin by saying that, for me, it wasn't an easy book to read. Nor was it an easy read for the French friend whom I lent it to. She gave it back two days later saying she couldn't understand it at all.

However, I must immediately qualify this by saying that I enjoyed reading EQUATIONS=equals very much. It has opened up to me a huge range of poetic possibilities that I had not previously considered, and it is also a very satisfying and stimulating adventure in poetry.

The fact that the contents of this book seemed so new to me reflects somewhat my own lack of knowledge of American poetry. To make a very broad generalisation, the British model of poetry concerns metre, rhymes, narrative and a respect for tradition. It bears little relation to the American model which demands experimentation, disjunction, emphasis on spatial form and hipness. In other words, British and American poetry are, for the most part, poles apart.

Due to these very different tastes, the British reading public (and that includes myself) is often served an American dish that is more in line with their normal fare: Billy Collins, Dana Gioia or, at the more experimental end of the spectrum, John Ashberry. This is, of course, a gross generalisation, but I think it has more than an element of truth to it.

In fact, I should have been more aware of the type of writing in Joe Ross' book because there are also British exponents of the type of experimentalism that one finds in EQUATIONS=equals. We can find it in the writing of Tom Raworth, for example, or Roy Fisher.

EQUATIONS=equals is not an easy read (especially for my French friend), but it's not as austere a book as the title might lead one to suppose. It's not a book that is pretending to solve a mathematical conundrum, for example. Here's a little taste of what you'll find inside:

They are English words all right, but you will search in vain for English sentences.

Word salad jumble fry your best on. Seen seen would if at better but.
Floppy found book shelf down. O.K. O.K. run run car board town.

The destruction of sentence structure is not an error. It is a technique. The words are clustered. They are bursts. You feel they have fallen into place, sometimes short of a letter, but not short of meaning.

A cardboard town would be good. But a car board town is better, or a town bored by cars. 'O.K. O.K. run run' might be a scene from a stick up. In the old days, gangsters used to ride the running boards of their cars...

That was from MANIC: dance. All the titles in this book are conjunctions, intuitive juxtapositions whose associations are explored through each poem.

Here's some lines from ESTRANGED: kin

Face down: Blood pool. I hide my stash, my jeans. You slash your sash.
This is ropeworld: Violent, twisted and calm. Buy me another drink.
Tip over my yes. Fold my face, softly. Oh, beauty: Justice.

The justice here does not sound like legal justice. It's more likely to be natural justice. The bad thing that happens to someone who deserved it. Already mentioned in this short poem have been: 'mangled wreck' and 'two kids and a car' and 'Disneyland. Graceland. Vineland.'

We are leaving the American dream and Raymond Chandler or Elmore Leonard is holding our hand. How often does stuff like this get into poetry? We read on the back cover that 'in the 1990s Joe Ross lived in Washinton D.C.' Now, Washington is where we find Congress and The White House, but it is also home to some of the worst social problems that America has to offer in terms of gun crime and drugs. There is no doubt that these aspects, together with a critique of unchecked capitalism, media-spinning political structures and environmental concerns form the backdrop to this collection.

There is rich slick of reality running through this book. A nasty, shrewd gas-guzzling reality. It's sensuous and sexually libellous:

A line that comes undone. Here honey your gun.
So sweet, so soft, so stiff. You're malleable in form.
I ask for butter but will accept lead. Take head.
Your sex excites my mind. Your cheese runs my dog.

This, from NOSTALGIA: report.

You'll start to see from these quotations that there is a distinct cross-over in the voice. It is somewhere between hipster and jazzman, between a smooth George Clooney and and a manic Robert de Niro. There's a bit of John Zorn's 'Naked City' in there, and a bit of Weegee, snapping away.

One of the key poems, and a good one, in this collection is ADVOCATE: don't wear black:

Sorry for the facts. Sorry for the fate. Sorry the way the cards got dealt.
So, no real big deal. We are we - used to it. Welcome to us.
Post-hype. Post-post generation. Here we are post-out looking to get back in.
The out-post generation - raised on division. Schooled in revision.
A multi-media blitz of fractured mind. Sampled and re-recorded.
We'll re-write the inside out.

It's a jiving, angry talk. And it let's us know what is going on in these poems. And why it is going on.

But there's also a sensuous side:

There's a million stars behind those lids, and no reason to keep your face in a jar.
I've sheep counted notes on your pillow and pills in your hand.
I promise I'll be kid kind tonight. Each of us prone and tight.
Come on, let's stretch our horizon, fold dreamy space down our tight verticals.

As you can see, this poetry doesn't always present overwhelming difficulty. It would be rather tiresome if it did. It does, however, frequently present a challenge:

Distrust
the rightly so of language. If I were to repeat myself would you...

... There's no easy way
to end this is to start, this. But that's been said before, feel now.
Read each sentence again, again. Slowly.

These lines are from NUANCE: absence, a poem which plays on the fact that a 'difficult' poem consisting of lines never imagined or written before must be read several times before it can be assimilated by the reader. The poet asks the reader "If I were to repeat myself would you." Which I interpret to mean: if I wrote lines of straightforward English poetry, would you bother to read it several times and assimilate it? Fundamental to Joe Ross' poetry is 'distrusting the rightly so of language'. He subverts language and finds out where it takes him, pounding along at a fast, jazzy pace.

EQUATIONS=equals is a small book but, at 124 pages long, it is one that packs a heavyweight punch. I find it difficult to do it justice in a short review like this. The word 'ropeworld' occurs a couple of times in the book. I think these ropes are the ones that try to tie us into a 'logical' use of language and, by extension, a 'logical' political contingency or a 'logical' mode of easy living. Ross prefers to adapt the language to himself, rather than adapt himself to the language.

For readers who want to discover something new and exciting in American poetry, I strongly recommend this book.


You can find the web site of Green Integer, publisher of EQUATIONS=equals by following this link.
Posted by Jonathan Wonham at 9:20 PM

Reading this I realised that I can't think of a single modern, I mean still-living, American poet that I've read recently...which is worrying me a bit - I'm just hoping that I have - but I can't honestly think of one.

It's made me realise the parochial nature of my poetic world - whereas my prosaic world is much more international.

A very interesting piece - one thing that occurred to me as I read was the similarity with Dylan Thomas's work - he was popular in the US, wasn't he?

Hello Clare - thank you for this. Yes, maybe there is a similarity with Dylan Thomas. A certain word-drunkness. (Enivrez-vous!)

Yes, DT was very popular with his US public. How much he influenced poets there, I'm not sure. I like his work very much.

There are lots of good American poets of course. You could try Raymond Carver's book 'All of Us' for example, or something by Sharon Olds or C.K. Williams.