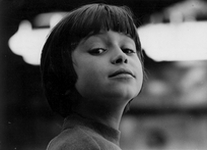 Ivy has tagged me (and about fifty other people!) for my 10 favourite movies. I am not prepared to divulge my ten all time favourite movies, but I will tell you my ten favourite French films. They are:

Zazie Dans Le Metro: the story of a cute but foul-mouthed little girl (see above) who has a wild weekend in Paris ending in all-out war. It is one of Philippe Noiret's earliest films, the actor who later became well known for playing the poet Pablo Neruda in 'Il Postino'. Noiret plays the girl's uncle. It is characteristic of the film's humour that his job (the French say 'boulot') is Spanish dancer in a cabaret: an unlikely role left entirely to the viewer's imagination. Directed by Louis Malle and released in 1960. The film is based on a book of the same name by Raymond Queneau who specialised, page by page, in trying out every literary style under the sun. Zazie tries to do the same thing, but in the context of cinematic style.

Pauline à la Plage: I've seen quite a lot of films directed by Eric Rohmer, but this is the one that sticks in my memory. No famous actors and if you like Bruce Willis films, you definitely shouldn't bother with this one. I have recently ordered a copy of Rohmer's film called 'Clare's Knee' which is a film about a man who wants to touch a girl's knee. It is supposed to be very good.

La Grande Vadrouille: A seriously funny film about some British aviators who bail out over occupied Paris during the second world war. They are rescued and smuggled into the unoccupied zone by some reticent French men played by Louis de Funes and Bourvil. It also features the British actor Terry Thomas sporting a regulation British airforce moustache. The film was directed by Gérard Oury and released in 1966. According to Wikipedia this is the most successful French film of all time with more than 17 million viewers. It ought to be well known on British TV screens as well, but as far as I know it isn't.

Les Apprentis: a story of friendship through difficult times for Antoine and Fred. Gerard Depardieu's son Guillaume won a César for his role. Directed by Pierre Salvadori and released in 1995. A year later, Guillaume had a motorcycle accident that cost him a leg.

Nikita: This is perhaps more suited to Bruce Willis fans: Nikita, a young druggie, shoots a policeman. She stands trial and is sentenced but escapes prison and death by agreeing to become a highly-trained assassin for the French government (who else?) The breakthrough film for director Luc Besson, released in 1990.

Milou en Mai: Another film by the great director Louis Malle, a farce depicting the impact of 1968's revolutionary fervour on preparations for a funeral in a French village. The film is very atmospheric with a good soundtrack featuring the jazz violinist Stéphane Grappelli. Released in 1990.

Romuald et Juliette: The story of Romuald, the P.D.G. (Le président-directeur général) of a business company, who falls in love with his matronly office cleaning lady who happens to be black. She refuses to return his love because of their difference in social status and he has to work hard to overcome the obstacles. Directed by Coline Serreau and released in 1989. Romuald is played by the excellent Daniel Auteil, one of the major actors on French screens over the past thirty years. In 1987, he won a Cesar for his role as a simple but cunning French peasant in Jean de Florette, also a rather good film.

Le Fabuleux Destin d'Amélie Poulain: Well, everyone knows this one I guess. Known simply as 'Amelie' in British cinemas it was directed by Jean-Pierre Jeunet and released in 2001. The film stars young, innocent and a bit strange Audrey Tautou as a girl who has undoubtedly never danced around a handbag in a nightclub (the French say 'boite de nuit'). She prefers to spend her time rigging up devices to electrocute nasty greengrocers.

Well, that's your lot. And I'm tagging: Lesley, Lucy and Anno Domini simply hoping they'll have some good recommendations for the next ten French films to watch.
Posted by Jonathan Wonham at 11:02 PM
Labels: French Culture

Yes, Pierrot le Fou is interesting. The others I will have to lookout for. Thanks for the suggestions.

I enjoyed yours, please find mune at http://box-elder.blogspot.com/2007/02/ten-french-films-and-other-roads-to.html
which was fun to do. I inadvertently found myself watching the da Vinci code at 50,000 feet somewhere over Central Asia in the middle of the night - honestly I wouldn't have looked at it otherwise - and was interested to see what a bland nonentity Audrey Tautou had become; another European actress goes west.

Give me a few days and I'll come up with a list.... maybe. Pauline à la Plage was one of the first French films I ever saw. I hate Arielle Dombasle and her Barbie looks and faux-philosopher husband, but I have to admit that she was actually quite convincing in this one.

How about Jacques Rivette's "Haut, Bas, Fragile"? I have the 6-movie Rivette set with that and have watched it and "La Bande des Quatre" already: beautiful movies.

Andrew - Thanks for the suggestion. That is a new name to me.

Hello, welcome back! Thanks for coming and reviewing my list, it's been interesting and surprisingly wide-ranging hasn't it?
Hope the birthday bash was a success, be seeing you.