The Hill Behind the House No. 2

After a somewhat longer interval than I anticipated (it's almost a year since I posted the first Hill Behind the House post here), I've finally got around to thinking again about the hill.

Not that I haven't been there of course. All through the past year I've been visiting the woodland tracks that cross the summit, occasionally taking photographs, sometimes diverting through thick undergrowth to see what I might find.

It's been clear to me for some time that there is a half-buried archaeology up there on the hill. One group of remains consists of a series of very large concrete blocks set into the ground. They are about 2 metres high and four metres across. One of the long sides is sheer and the other is steeply sloping. the sloping side has a set of steel or iron loops embedded in a line down the centre. According to a guidebook called "Out and About Stavanger's Green Belts" by Erik Thoring, these concrete blocks are the remains of a radio tower built on the hill in 1914.

Thoring says that the blocks are situated on Auglendshøyden (Augland Heights) which I suppose identifies the western side of the Hinnaberget hill. According to Thoring, the blocks are nearly one hundred years old, and represent the foundations of radio masts which locals once referred to as "Ullandhaug's Howler". The masts existed for around twenty years before being torn down in 1935.

I found the photograph above of Ullandhaug (Hinna) on the internet. The location seems correct, but I didn't recognise the area at all. After looking up the location on Google maps, I found that the building in the photograph still exists, and I went to take a photograph of it. The building is still complete, however you can only see half of it because the view is blocked by trees.

The hill is now covered by woodland, some of which is very mature and must have been planted with pines at least fifty years ago. But if the photograph was taken before 1939, I suppose the landscape could have considerably changed over the past 70 years.

Here's another picture which shows how completely naked of vegetation the hill was at that time. The photograph is a more expansive view looking in the same direction and indicates that further radio masts were added to the first one through time. The masts appear as tall poles, but in fact they were held up with a cobweb of guy lines that were attached to the concrete blocks I described earlier. The aerial itself consisted of 24 bronze wires, each approximately 1070 m long, hung between 10 steel masts which were 122 metres high. Each mast was in turn held by six guy lines and weighed 62 tons.

According to one of the web sites from which these pictures are sourced, the radio mast was an example of Marconi's directive antenna type and was constructed in 1914. The radio waves were beamed directly towards Boston, Massachusettes and for this reason the Stavanger radio station was referred to as the America Exchange.

The architect of the Stavanger radio station was Ole Sverre. The transmitter at Ullandhaug is said to have been one of the noisiest workplaces in the country. Farmers in the neighborhood complained about the noise pollution. The noise was produced by the radio signal creation process. The signals were generated by huge turning wheels inside the transmitting station. The technicians had to use artillery gun ear protection, and the ground shook when the broadcast was in progress. I had imagined that the radio masts were called "Ullandhaug's Howler" because of the noise of the wind in the wires, but it seems that the noise of the radio signals might be a more likely explanation.

Below is another photograph of the tall radio antenna constructed at Tryvasshøgda which was once a famous feature of the Kristiana region. I think they make a rather beautiful construction. 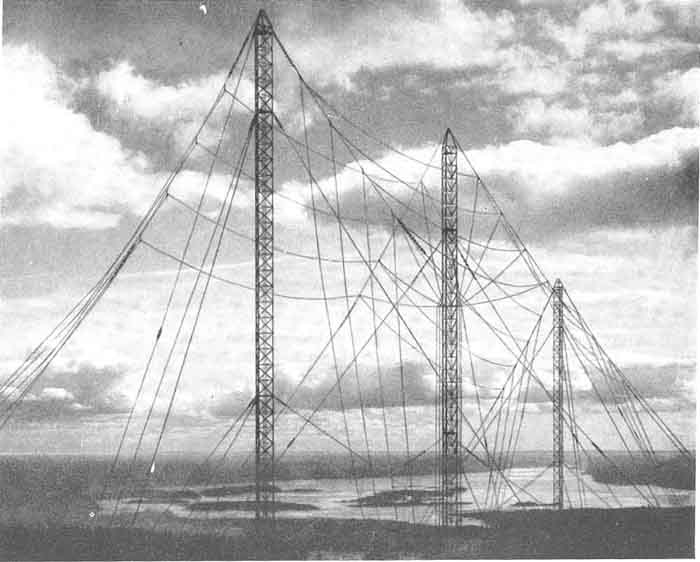 What this shows is that, only seventy years ago, the Hinnaberget looked extremely different to how it appears today. Over that time, it has been transformed from a bare mountain with hardly any soil or vegetation into a forest covered by tracks and paths. The old landscape is still there, just below the surface, and is revealed by occasional large patches of bare rock. It is the reason many of the tracks through the forest pass over a shining web of trees roots, these roots being unable to penetrate the rock below.
Posted by Jonathan Wonham at 9:29 PM
Labels: The Hill Behind the House